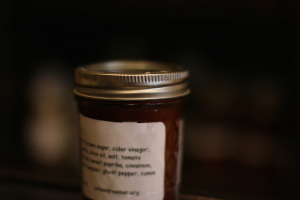 So here’s a question – why on earth would I

There’s this favorite sushi place that my family and I used to frequent – they had amazing fresh fish, friendly skilled sushi chefs that we called by their first names (and they knew us by name too), and they had this amazing thing there – homemade soy sauce. Made fresh, it only lasted for a week or two. This stuff was incredible, to say the least. And the sushi place isn’t there anymore (sniffle, sigh, moan), but I have to say, we have been able to keep in touch with the people, have gotten great fish elsewhere, but that soy sauce, ooohhh the soy sauce, it has been IMPOSSIBLE to duplicate.

That’s kind of like this ketchup. It’s wonderful and delightful and flavorful and unique and you simply can’t find it or buy it anywhere.

Please try it. I don’t believe you will be sorry you did. Good news is, it lasts way more than a week or two in your pantry.

Yield – about 10 pints, or generally a little less than a pint per each pound of tomatoes. This recipe can be halved.

10-12 pounds of tomatoes, preferably Roma or a mix of Roma and others, washed and cut in half

1 tsp Hepp’s ghost pepper (this is a particular and important ingredient made by a company called Hepp’s… I don’t know of a good replacement and I think this stuff makes this ketchup extra special. I found this ingredient at a farmer’s market years ago, and thankfully it is now offered at Amazon – click here to find it for your own pantry!)

1 small can of tomato paste (6 ounces)

In a large Dutch oven, heat oil over medium heat. Add onion and garlic and sauté until the onion is softened but not yet brown. Add all remaining ingredients and bring to a boil, then lower the heat and simmer. Cook, stirring occasionally and mashing with a potato masher for about 2 hours. It should be very soupy and fragrant and all the tomatoes should be very soft. If everything is not really soft, cook up to an hour longer.

Pass through a food mill fitted with the disk with the smallest holes to remove the skins and seeds and bay leaf and stuff. Rinse out the Dutch oven and put all of the ketchup mixture back in and return it to the stove. Cook at a low simmer, stirring occasionally, until thickened substantially, about 2-4 hours. It should seem to you like “maybe when it gets cold it will be the consistency of ketchup”. Remove from the heat and let cool for about an hour. The cover and put in the refrigerator overnight.

The next day, take a spoonful of the ketchup and put it on a plate. Look at it. Is there a ring of red water seeping out of the ketchup? If so, put it back on the stove to cook at a low simmer for a few more hours. Also, taste it. This is a good time to adjust seasonings a bit more to your taste – common ingredients to add at this point are brown sugar, agave syrup, cider vinegar, kosher salt and / or ghost pepper.

Continue to simmer, stirring occasionally, until thickened. Taste again and ensure the viscosity is to your preference (i.e. you like the thickness).

Process for 20 minutes in a hot water bath.

Variation: for a slightly smoky spicy version of this ketchup, double the cayenne pepper, triple the ghost pepper and add 2 dried Ancho chilies and 1 fresh jalapeno with the tomatoes.

This post contains affiliate links, which means if you use my link to make a purchase I’ll make a few bucks (or cents) and have some extra money for seeds, dirt, chicken feed, sugar or website maintenance!